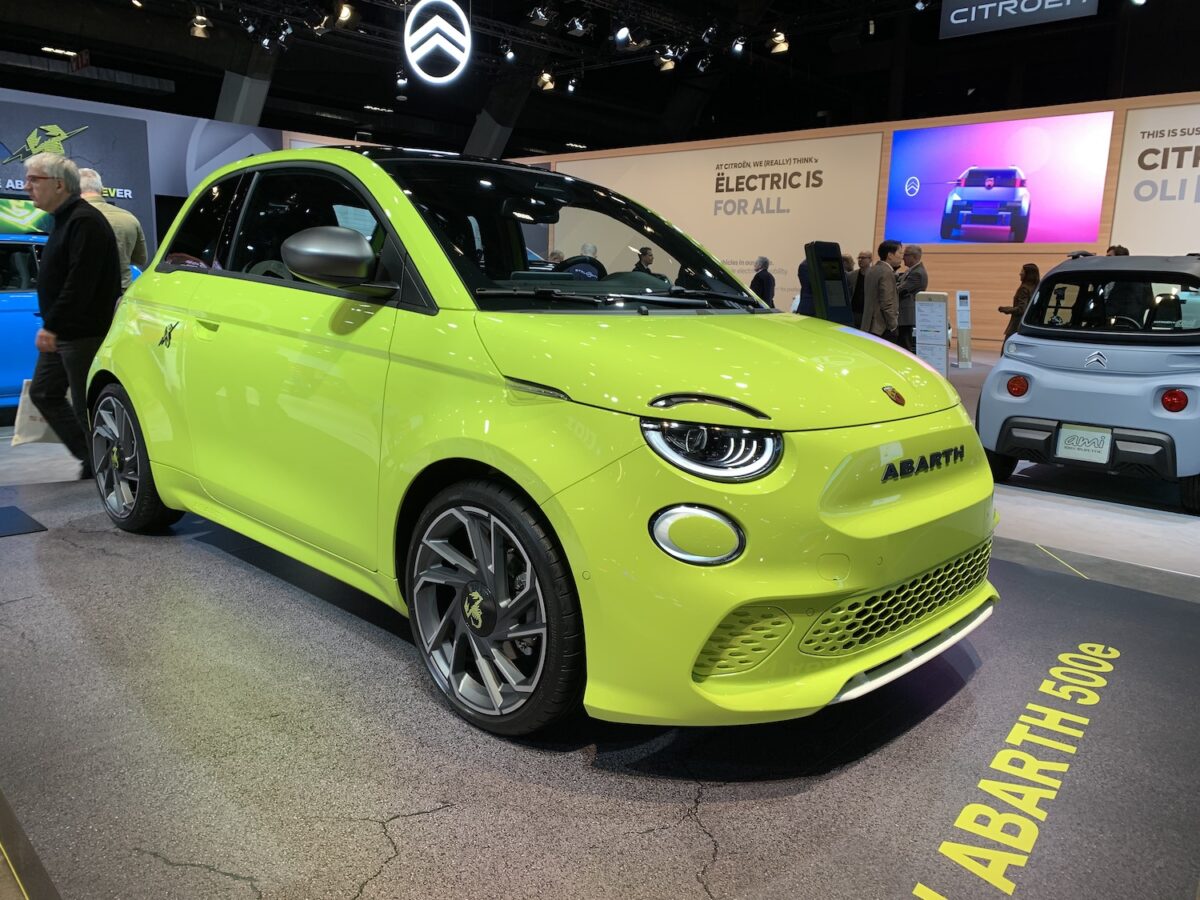 Are the major motor shows over? No, some are putting up a good resistance, like that of Brussels. Open from January 14 to 22, the Belgian show is full of brands. They are also all present, or almost (Mercedes is just missing in the big names). We almost had an impression of old times going around the well-furnished pavilions, after having gotten used to visiting shows with a very light program, such as the last Paris Motor Show.

If Brussels is an exception, it is because this show weighs heavily on car sales in Belgium. Not coming meant taking the risk of missing customers! But the event is not self-centered on the Belgian market, it has a European scope. It is thus the scene of several world and European premieres.

If you live not far from the Belgian border, the trip is worth it. To inspire you, we went for a preview visit to show you the major new electrical products at the show. 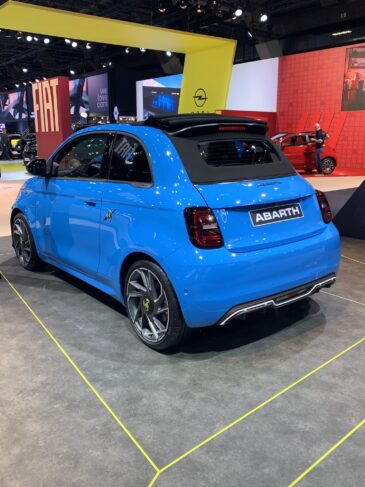 First public outing for the Abarth 500e. You guessed it, it’s the sporty version of the new electric Fiat 500, and therefore the first connected Abarth. Engine power increased from 118 to 154 hp. This may seem modest compared to thermal Abarths, but the brand promises much better acceleration and therefore unprecedented liveliness for the 500. Too bad the look is not more personalized, even if the 18-inch rims are pretty. The 42 kWh battery does not move, the range will be around 300 km. 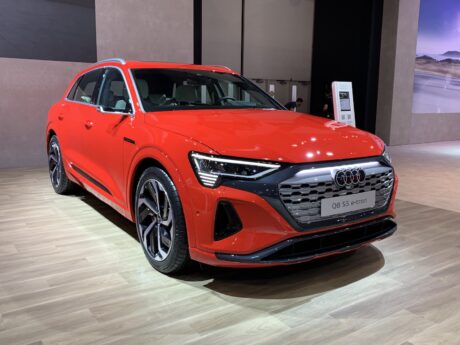 Audi’s first electric model is changing its name. No longer say e-tron, but Q8 e-tron, a way to better place it in the range now that there are other electric SUVs at Audi. The front face evolves with a new grille, which incorporates a light bar. This highlights the new Audi logo, with flat rings. The restyling is above all an opportunity to install larger batteries in the bowels. Depending on the model, autonomy increases by up to 40%. Thus, the 55 variant with a 106 kWh (net) battery flirts with 600 km. 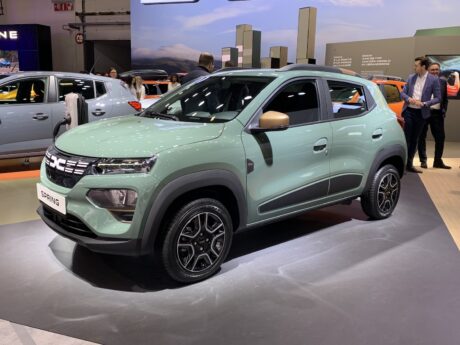 The Spring came to Brussels with a new finish, which replaces the Expression level. It benefits from a few new style elements, such as stripping with a topographic pattern and copper-brown painted details. But the real change is under the hood: the Extreme has a new, more muscular engine: the power goes from 45 to 65 hp. Enough to ensure better acceleration and recovery. No change for the battery, the range in the WLTP combined cycle loses only 10 km, to 220 km. This model costs 22,300 €.

If was unveiled at the Paris Motor Show, the Jeep Avenger was the star of the show. In fact, it received the prestigious title of Car of the Year 2023 in Brussels, awarded by a jury of European journalists. The model is well ahead of its competitors! The Avenger is Jeep’s first all-electric model, an urban SUV (it’s even shorter than the Clio). It receives the new technical elements of urban/compact electric cars from Stellantis, i.e. a 156 hp block and a 54 kWh battery, which gives a range of 400 km. Order books are open in France.

Read also
Car of the Year 2023: the electric Jeep Avenger wins by KO

Long resistant to rechargeable electrified models, Lexus obviously cannot stand still in the face of the transformation of the automotive market, especially in Europe. After putting a wheel on the electric market with a trendy version of the UX, he launched the RZ 450e, his first electric vehicle designed on a dedicated basis. This is shared with the Toyota BZ4X. premium positioning requires, the Lexus is distinguished by a higher power, with 313 hp (against 218 at Toyota). But the battery is the same, with a somewhat tight capacity, 71.4 kWh. Autonomy is therefore a notch below the competition, with just over 400 km. 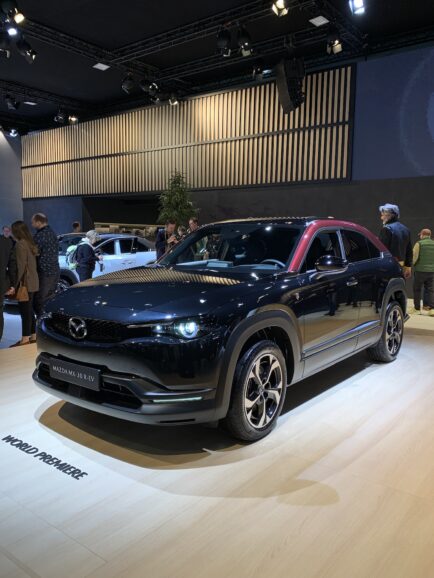 World premiere for Mazda in Brussels. The manufacturer has come up with a new rechargeable hybrid version of the MX-30, which until now has been 100% electric. The technical assembly is original: a 170 hp electric unit always provides traction alone. But it is now associated with a rotary gasoline engine that serves as a range extender. Thanks to a 17.8 kWh battery, you can do 85 km in 100% electric (WLTP mixed cycle), then the 50 liters of gasoline add 600 km of autonomy. The MX-30 thus becomes much more versatile, the 100% electric version being limited to 200 km of autonomy.

Read also
Mazda MX-30 R-EV: the electric SUV becomes a plug-in hybrid with a rotary engine with 600 km of autonomy

While the Peugeot e-308 has not yet shown itself, Opel came to Brussels with the Astra Electric, unveiled as a world premiere. On the outside, nothing changes, or almost since we still see new rims, with neat aero. The novelty is of course in the bowels, with the new Stellantis electric block of 116 kW, or 156 hp. The battery has a gross capacity of 54 kWh. According to the mixed WLTP standard, the range is 416 km. The electric Astra will be offered as a sedan and station wagon.

European premiere for the 3, Polestar’s first SUV, which could finally launch on the French market, the legal dispute between this brand and Citroën having been closed. The 3 is a beautiful baby, 4.90 meters long, but it is quite low, which almost makes it look like a big station wagon. Launched with two engines, the 3 offers 489 hp, or even 517 hp in the Performance version. In both cases, we have a 111 kWh battery, which gives up to 610 km of autonomy in the WLTP combined cycle.

Read also
Polestar 3: the large electric SUV shows itself from all angles

The Solterra is Subaru’s first electric model. Does it remind you of something? Normal, it’s a quasi-copy of the Toyota bZ4X. The Subaru version is distinguished by the grille and the shield. This model is offered in a four-wheel drive version, with two motors for a maximum combined power of 218 hp. The battery has a capacity of 71.4 kWh, for a range of up to 466 km (mixed WLTP). Still, like the Toyota, this Subaru is slow to arrive in France, with prices that are still not known.