China’s exports suffered their biggest plunge since the start of the pandemic in December, due to a Covid rebound at home and sluggish demand abroad.

After three years of some of the most draconian health restrictions in the world, China abruptly lifted most of its measures against the coronavirus in early December.

The decision has led to an exponential increase in the number of Covid patients in the country, which has greatly disrupted production and supply chains.

Despite the end of the restrictions, which for three years dealt a severe blow to the second largest economy in the world, activity is still struggling to restart. 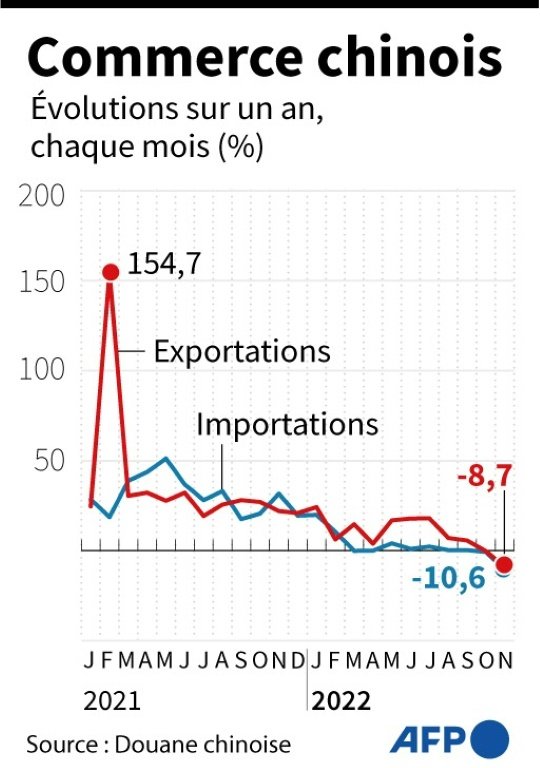 In this context, China’s exports tumbled again in December (-9.9% over one year), according to figures published by Chinese Customs.

This is their second consecutive month of decline and the steepest decline since 2020.

Already in November, China’s sales abroad had experienced their biggest drop (-8.7%) since the start of the pandemic in 2020, when China was practically at a standstill.

Exports have been the main driver of the Chinese economy since 2020, when confinements in the world led to strong demand for Chinese goods, in particular medical products against Covid or even tools for teleworking.

The threat of recession in the United States and Europe, combined with soaring energy prices, has also contributed to weakening international demand for Chinese products.

The global economy risks being “a major element” of deterioration for the Chinese economy in 2023, warns Larry Hu, analyst for the Macquarie investment bank.

China will unveil its growth figure for 2022 on Tuesday, along with a series of other economic indicators.

But this objective was undermined by the strict health policy known as “zero Covid”, which during most of the year was a brake on activity and consumption.

“Weak exports underscore how important it is to boost domestic demand to make it a driver of the Chinese economy” this year, said analyst Zhiwei Zhang of Pinpoint Asset Management.

Imports from China were down again in December (-7.5%) after a more pronounced drop the previous month (-10.6%).

The uncertainties linked to Covid and the economic slowdown in China are having an impact on Chinese needs for foreign products.

They had recorded a marked acceleration (+30.1%) in 2021, when activity in China was recovering from the first epidemic wave.

But this level is well below the record amount of July (101.2 billion dollars).

For its part, the Chinese trade deficit with Russia more than tripled last year, reaching 38 billion dollars, due in particular to Beijing’s growing interest in cheap Russian gas.