PSG took advantage of the recent and highly publicized friendly match against Cristiano Ronaldo’s team to launch its fourth jersey of the season, black and yellow. Officially revealed just before the match, it is supposed to pay “homage to the city of light” and “convey a feeling of speed”.

For the fourth time this season as is now the norm, PSG launched a new kit midweek. Taking advantage of the incredible exposure of the friendly match in Saudi Arabia against the local team led by Cristiano Ronaldo, the Parisian club has therefore unveiled its fourth kit for the 2022/2023 season. It doesn’t matter that the jersey is not even available in stores yet (it will be on Monday), it was unveiled by the club on Thursday January 19 just before the kick-off of the match.

The fourth jersey presented on the PSG online store:

This fourth jersey, supplied by the Jordan brand like the outside, was provided with a small explanation of the colors chosen, neither black nor yellow being traditional for PSG: “ Innovative and daring, the jersey pays homage to the city of light. The black recalls the evenings of the big posters at the Parc des Princes. The jersey is crossed by many yellow beams, the arrangement of which pays a subtle tribute to the illuminated beams of the most beautiful monument in the capital, the Eiffel Tower, which sits proudly on the Club logo. The tunic has a resolutely electric look that conveys a feeling of speed. » 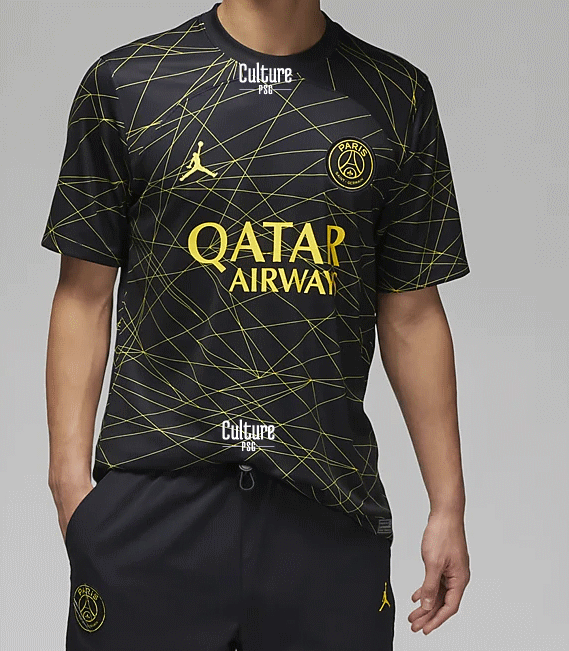 Two other pieces of information were slipped by the club on the occasion of this release of the new jersey. In addition to wearing it against the Riyadh Season Team (5-4), it will be worn at the Parc des Princes against Reims on Sunday January 29 in the league. Moreover, “The Parisian jersey is accompanied by a complete lifestyle collection made up of iconic Jordan Brand models for women, men and children. Paris Saint-Germain is thus unveiling a new range of products that reinforces its status as the coolest club in the world. »